Deb uses her music to enhance our human connection, and bring 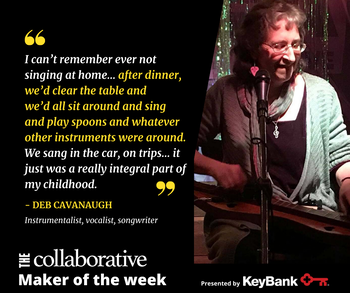 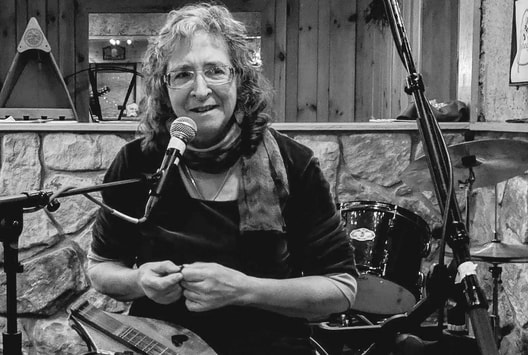 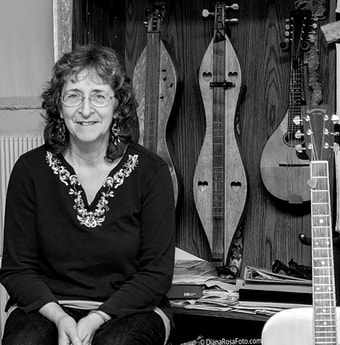 http://www.nippertown.com/2014/07/07/live-deb-cavanaugh-emack-bolios-61314/
​
Back in the ’80s – I know for many of you this is equivalent to a fairy tale – a band called General Eclectic (a sly play on General Electric, the industrial behemoth) roamed through Albany and its environs spreading its resoundingly anti-authoritarian gospel of hot blues and spicy, tasteful rock ‘n roll. At its incandescent center were Deb and Paul Cavanaugh, a husband and wife team of rebels and true believers. Against the complacency and blasé conformism of the era (a “peaceful time” chock full of vicious injustices), they flung every ounce and gram of their energy, every microdot.
Okay, back to the future. Deb Cavanaugh remembers her late husband with a song called “Highway in Your Eyes,” which traces their blossoming romance and cross-country adventures with wistful, knowing backward glances. As she sings it, you can feel her toying with the giddiness of young love, the fleeting, star-bursty emotional zingers, the onset of adult responsibilities, the whole catalog of life’s delights and disappointments. Its message seems to be: despite all that you know better, we have no choice but to surrender to our most burning desires. Our truest selves will not take ‘no’ for an answer. - Joel Patterson, videographer, recording and sound engineer, Petersburgh, NY
Here's a link to an article in the New York Times about the Ars Choralis project that was performed in Germany in 2009, “Music in Desperate Times: Remembering the Women’s Orchestra of Birkenau.”  http://www.nytimes.com/2009/03/26/arts/music/26birk.html?pagewanted=all&_r=1&
and another review of the same program:
Music In Desperate Times Review
In the darkest times, music provides solace and illustrates what is best in the human spirit.
During the depths of World War II, women musicians incarcerated at the Auschwitz/Birkenau concentration camp were required to play for their Nazi captors. This is a story about how music saved the lives of those women. It is also the story of a small-town chorus that has brought back the music, hope, grief and resilience of these women.
Over one million people were murdered in Birkenau gas chambers. In exchange for their survival, a women’s orchestra was formed by the S.S. at Birchenau.  During the year and a half it existed, 54 women participated in the orchestra. All but the conductor survived.
Barbara Pickhardt, conductor of the Woodstock, NY chorus, Ars Choralis, researched survivor¹s memoirs and created Music in Desperate Times: Remembering the Women¹s Orchestra of Birkenau. The concert interwove orchestral music (Schumann, Chopin, Puccini, Mendelssohn and others) with spoken memoirs and songs of hope, peace and resistance sung by the chorus. Donning the simple lavender scarves worn by the Birkenau musicians, the members of the reconstructed orchestra felt a shiver of connection to the original orchestra as they played arrangements of the same music played in the camps.
Ars Choralis performed Music in Desperate Times: Remembering the Women’s Orchestra of Birkenau to great acclaim in Hudson Valley churches, colleges and synagogues. The audience response was so powerful that repeat performances were demanded. On Saturday, March 28th, Ars Choralis performed the concert for an appreciative audience of 1100 people at the newly re-dedicated and renovated Cathedral Church of Saint John The Divine in New York City. The concert was introduced by Dr Ruth Westheimer, herself a survivor of the holocaust. St. John The Divine is a landmark church, the largest Anglican Cathedral in North America.
• Survivors of the Ravensbrück concentration camp in Furstenberg, Germany have invited Ars Choralis to perform at their annual Liberation Day ceremonies on April 18 and 19, 2009 on the grounds of the camp.
• Heilig Kreuz Passion Church in Berlin has invited Ars Choralis to perform Music in Desperate Times on Friday, April 17, 2009.
Here is an interview I did about the Family Jam in March 2013.
http://wnyt.com/article/stories/s2960642.shtml
About Cavanaugh & Kavanaugh:
“This … duo, who just happen to share the same last name in pronunciation if not spelling, have been a long time part of the Capital District music scene… talented multi-instrumentalists (banjo, guitar, piano, mandolin, dulcimer, limberjack) who share a commitment to music as a way of life.”
- Caffè Lena (Saratoga Springs, NY)
“… by singing old songs alongside their originals, they seem to relish being part of a kind of folksong dialogue that stretches back through history, but still touches the present…  Even among an evolving roots-music community where younger generations of artists are bending what folk means, Cavanaugh and Kavanaugh still have the earnest, sweet sound that’s typical of their baby boomer generation and the time that generation ushered in the first folk boom.”
- Philip Schwartz Gazette Reporter (Schenectady, NY)
“On a snowy March afternoon, the duo of Deb Cavanaugh and Dick Kavanaugh brought spring to the Cambridge Library. Their musical program was enjoyed by both young and old.  The little ones were singing along, and delighted to see the limberjack dancing.  After the performance, everyone was eager to inspect the various instruments.  I highly recommend the duo.”
- anonymous (Cambridge Librarian, Cambridge, NY)
“Not only are Deb Cavanaugh and Dick Kavanaugh both multi-talented instrumentalists, but they both sing and contribute some heartfelt original songs…”
-Greg Haymes Times Union CD review (Albany, NY)
From The Daily Gazette, 11-7-07, Page D8

BY PHILIP SCHWARTZ Gazette Reporter
Deb Cavanaugh and Dick Kavanaugh get passionate when the subject of traditional music arises. And in a conversation with the folk duo — billed as Cavanaugh and Kavanaugh — that subject will inevitably come up.  Over coffee and tea at a cafe near their Albany home, the couple, both life and musical partners, get into the importance of folk music, the need to keep traditions alive and how it’s all tied to our understanding of American culture and history.  “It’s important for us to know and remember our culture,” Cavanaugh says, “and it’s getting lost and increasingly becoming a corporate culture.”
Managing to avoid a self-righteous tone, both Cavanaugh and Kavanaugh talk about their mission (though they don’t expressly use that word) to help pass along the traditions of folk through their workshops and performances. And by singing old songs alongside their originals, they seem to relish being part of a kind of folksong dialogue that stretches back through history, but still touches the present.
ORGANIC GROWTH
When they first started playing as a duo, however, there wasn’t any sort of overarching commitment to traditions or preservation, Cavanaugh said. “It’s become more of a focus over the years,” she noted. “I started with just saying ‘I’d like to do some traditional stuff.’ Then as time went on, it became more deliberate.”
Cavanaugh and Kavanaugh have been life partners for 14 years, their coupling somewhat fortuitous considering the similar last names. Cavanaugh, a full-time musician who teaches and gives workshops, has been playing all her life.  “I grew up in a family where there was always singing,” the Stamford, Conn., native said. “We were always playing music. We would often, after dinner, clear the table, sit and sing. . . . I was singing harmonies when I was 3. The first time I got a paying gig, I was 15.”
By contrast, Kavanaugh, an electrician by trade, grew up in Delmar with a purist’s love of folk and acoustic blues, but didn’t start playing until his mid-30s. Similarly, his partner, though she spent her younger days concentrating on the piano and vocals, waited until age 40 to take up the stringed instruments that are so much a part of the Cavanaugh and Kavanaugh sound: mandolin, dulcimer, guitar. The stringed instruments he plays are guitar, mandolin, fiddle and banjo. Live performances can include any combination of those, in addition to Cavanaugh’s limber jack or Kavanaugh’s pennywhistle.
TIMELESS SONGS
The traditional songs they play, meanwhile, center on the old-time Irish and Southern U.S. traditions. Anti-war and labor songs such as “Green Fields of France,” “Mrs. McGrath,” “Masters of War,” “Granite Mills” and “I Feel Like I’m Fixin’ to Die Rag” are all part of the repertoire. But underneath it all is a slight, if mild, tension between Cavanaugh’s want to infuse new influences and Kavanaugh’s more purist nature. This can be a strength, however, Cavanaugh said. “That’s what makes us interesting,” she said. “Dick has that traditional focus and I want to be wild and do whatever.”
Playing traditional music, however, can be somewhat of an occupational hazard in a culture obsessed with youth and the taste of now. Even among an evolving roots-music community where younger generations of artists are bending what folk means, Cavanaugh and Kavanaugh still have the earnest, sweet sound that’s typical of their baby boomer generation and the time that generation ushered in the first folk boom. Nevertheless, Kavanaugh maintains that this music is just as relevant today, and will continue to be for the next generation.
“There’s a string of commonality to folk music where it touches everyone,” he said. “I feel like most of these traditional songs are timeless. Sing a song like ‘Green Fields of France’ and that was written about World War I. It still moves people. Not much has changed, you know. We’re still fighting wars.”